Can you believe that I didn't get ONE thing for Christmas at all sewing/quilting related? BLASPHEMY!!
Yes, one could argue that Suki was my early gift, and it was. But I could have at least seen a spool of thread, or a magazine, you know?

I'll have to correct that this week. :-)

I've been thinking of things ahead in 2010. I'd like to focus more on my quilting projects and less on the research and dilly dallying. Is that a word? Since February, I've really taken quilting to a new level, more enjoyment than just an occasional hobby. I'd like to step up to more projects, instead of admiring others, I'd like to showcase more myself. Stay tuned.

The holidays have been a blur - but good. My inlaws from South Carolina, and dh's Grandma from Vancouver came into town for the week. It's been busy trying to accomodate everyone's needs. All in all, I think it went fine, especially cramming 7 passengers in the 7 passenger minivan. My ass just doesn't want feel the love of the back bench seat squeezed in with the two kid carseats. 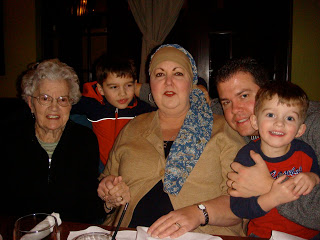 There's 4 generations right there - isn't that cool? We're so lucky to have Trent's mom pull well through chemo, and have her well enough to visit us here. Does she not rock the chemo scarf, or what? She's the most glammed chemo chick I've ever seen. I'm going to be making her more scarves like that. She brought her favourite ones along, I investigated how it was made, jotted down measurements and am going to work on it.

New Years Eve plans - most likely in bed by 10:30. We don't do anything crazy. I don't like the major hype and then the let down the next few days. New Years has started for me now. Including the chocolate Santa I stole, er borrowed from my son while composing this post.